Father Salmon comes to Bethesda-by-the-Sea after a career in Episcopal education and non-profit work, and he brings a passion for the role of Christian formation in an informed, faithful life, as well as the importance of relationships within a community of believers, as well as outside it.

A native of Natchez, Mississippi, Father Burl took a bachelor’s degree at Millsaps College, double majoring in English and Organ Performance. He completed his Master of Divinity at Yale University and earned a Diploma of Anglican Studies from Berkeley Divinity School at Yale as well as a Certificate of Study at the Yale Institute of Sacred Music. An educator, Burl has served variously on English, religion, and music faculties at Holy Innocents’ Episcopal School in Atlanta, Georgia, St. Stephen’s and St. Agnes School in Alexandria, Virginia, The Lovett School in Atlanta, and as chaplain and dean at Trinity Episcopal School in Charlotte, North Carolina. Between stints as an educator, Burl led the post-Katrina development efforts and public relations at The Historic New Orleans Collection, an archive, museum, and publisher devoted to the preservation of the culture of the Gulf South.

Burl’s ministry has focused greatly on faith formation and creating the spiritual space to live into who God calls each person to be. He also understands that ministry is relational and built at the intersection where individuals encounter each other and the Divine simultaneously. An artist and an educator, Burl thinks about Christian discipleship creatively and loves the questions of faith as much as he finds strength in the promises of faith. His homilies may reference Giotto and Johann Sebastian Bach one week and include lines from William Blake and Cole Porter the next. Visitors to his study will always find music playing.

Reared in the United Methodist Church and educated at an Episcopal school, Burl returned to the Episcopal Church, the tradition of his father’s family, in college, drawn back to the liturgy and sacramental theology of Anglicanism but retaining a Wesleyan respect for evangelism, personal piety, and faith-in-practice. He was sponsored for the priesthood and ordained in the Diocese of Atlanta.

A lover of things that have come before him, Burl is an avid historian and genetic genealogist. The product of a family long involved in historic preservation, Burl and his husband, Robert Henkel, are restoring Mayes Hall, an 1830s farmhouse in Lexington, Georgia, the hometown of Burl’s great-grandfather. He is a gardener and seeks every opportunity to discover the botanical life of south Florida, which is wondrous in its diversity. Burl is also a runner and is grateful for the flat terrain of coastal Florida

Burl and Bob, a native of Eatontown, New Jersey, and Director of Communications for the American Society of Nephrology, along with their feline companions Belle and Blue, live in downtown West Palm Beach and are delighted to be a part of Bethesda and the Palm Beach community. 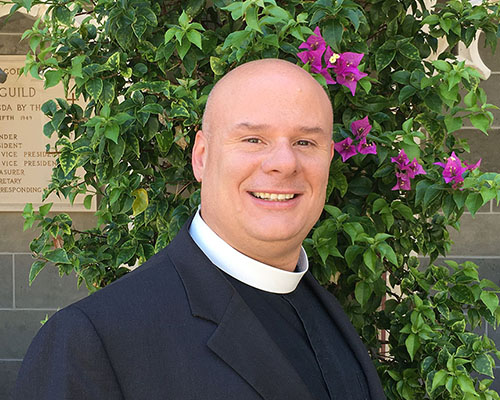