The Rev. Tim Schenck (pronounced skenk) joined Bethesda as rector in 2022, following 14 years as rector of the Episcopal Parish of St. John the Evangelist in Hingham, MA. He previously served parishes in New York and Maryland.

Originally from Baltimore, Tim graduated from Tufts University in Medford, MA, in 1991, where he was also enrolled in Army ROTC. Trained as a tank platoon leader and paratrooper, Tim served in the Army Reserve while working as a political campaign manager for candidates on the federal, state, and local levels.

He received a Master of Divinity from Seabury-Western Theological Seminary in Evanston, IL, in 2000, and was ordained in the Diocese of Maryland.

Tim is well known throughout the Episcopal Church as the creator of the wildly popular online devotion Lent Madness (think 32 saints in an NCAA-style bracket).

He is the author of five books full of humor and faith including, most recently, Holy Grounds: The Surprising Connection Between Coffee and Faith – From Dancing Goats to Satan’s Drink (Fortress Press). His forthcoming book, Devotions for People Who Don’t Do Devotions, will be published by Forward Movement in 2023. Active on social media, where you can follow him on Facebook, Instagram, or Twitter @FatherTim, he has long used digital spaces to keep communities connected and thriving.

Tim and his wife, Bryna Rogers, a native of Westchester County, NY, have two sons in their early 20’s, Benedict and Zachary. Bryna serves as Director of Development & Community Relations at Bay State Community Services, a social service agency. Tim and Bryna live in Bethesda’s rectory with their two rescue dogs, Cooper and Daisy Duke. 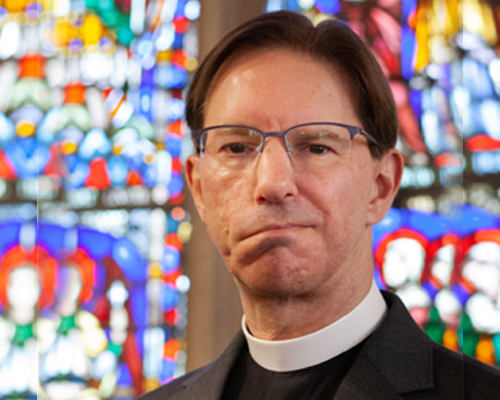