As we all prepare for Father James’ departure after his final service on June 27th, your vestry is pleased to announce that the Rev. Dr. Robert S. Dannals has agreed to serve as Interim Rector starting on July 1st. We wish to thank Bishop Eaton for identifying such a respected and engaging preacher, teacher, and pastor. Father Dannals has been unanimously approved by the vestry with the full support of the associates to fill this critical role as we look for our new full time Rector over the coming year. 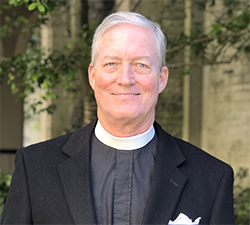 Bob Dannals brings a wealth of experience, leadership, and pastoral care as both an Interim and as a full time Rector. His insight and understanding will truly benefit our congregation as we prepare for the transition ahead. Bob has served as an Interim Rector at All Saints’ Episcopal Church in Beverly Hills, CA, at Holy Innocents’ Episcopal Church in Atlanta, GA, and at Saint Bartholomew’s Episcopal Church in New York where, coincidentally, Mother Margaret served during seminary. Previously, Father Dannals was the Rector at Saint Michael and All Angels Episcopal Church in Dallas, TX, with its congregation of over 7000, and at churches in North and South Carolina. He is a graduate of Virginia Theological Seminary, with a DMin. from Drew University and a Ph.D. from Graduate Theological Seminary.

A rare fifth generation Floridian, Bob is a prolific writer and teacher and an advocate of outreach and social justice ministry. His published articles and books include I0Q:Ten Spiritual Essays on Life’s Questions, the Advent/Christmas/Epiphany Commentary in the New Westminster Biblical Preaching Commentary, and daily lectionary-based E-Devotions. He has also been associated with national and international Episcopal and Anglican groups and boards as a member and participant.

At this time, Bob is finishing his service at Saint John’s Cathedral in Jacksonville and will officially begin his role at Bethesda on July 1st, first working remotely with the vestry and staff. He will come several times over the summer and will be physically present to start his ministry in September when he and his wife Valerie will be moving full time into the Rectory. As Interim Rector, he will assume all the typical Rector responsibilities, supported by the vestry, clergy, and administrative staff.

We are blessed to soon be welcoming Bob to our parish family and ask for your prayers as we celebrate our final weeks with Father James, build upon the legacy and momentum he has established, and start the transition to the next Rector of Bethesda.